The havelis and palaces of a legendary warrior race

Think of Udaipur, and the image that comes immediately to mind is of the pristine white Lake Palace in the midst of the Pichola Lake, the magnificent City Palace, and the endearing Kathputli Puppet Theatre. Udaipur is all this and much more. Ranjita Biswas takes us on a fascinating tour and tells us why ?

True, the city of Udaipur, founded by Mewar King Maharana Udai Singh II in 1568, was built more with strategic considerations as the place is protected by the lofty Aravalli Hills and lakes and forests. The Mughals constantly attacked Chittorgarh, the Mewar capital, which ultimately fell to the invaders.

Udai Singh shifted his capital here and the City Palace became his court. Over the next 400 years, his descendants added more quarters, ultimately to house 11 palaces. Fortunately, the additions did not spoil the edifice and aesthetically remained pleasing. Naturally, on a visit to Udaipur, the City Palace figures on top of the list of must-dos. The first sight of the palace-cumfort, facing the Pichola Lake, is quite awesome, built on a rock face in a fusion of Rajasthani and Mughal architectural style.

The Mewars were a warrior race and the valour of Maharana Pratap Singh is legendary as he fought off the mighty Mughals time and again. Yet, the City Palace which reflects the glory days of the Mewars, is more than a functional fort. Inside, one gets introduced to the rich heritage of art and culture the Sisodia clan of the Mewars encouraged and nurtured. Many of the quarters of the palace are now museums with two of them turned into heritage hotels.

The first introduction to the palace is through the Tripolia Gate, a beautiful triple-arched marble gate which was built in 1725. This leads to the Rajya Angan, the royal courtyard. According to legends, a sage had advised Udai Singh to found a city here when he was in one of his hunting trips and this is the spot where he met the ascetic.

On one side of the courtyard is an image of Lord Ganesha surrounded by beautiful glass inlay work. Opposite, at the entrance to the museum section, the walls are adorned with large paintings depicting the lifestyle of the Ranas – durbar assemblies, processions, hunting expeditions, elephant fights, etc. These were painted from around 1700 continuing to 1940s, according to historians. They show how traditional Mewar artists adopted styles of the Mughal school and, later, with the advent of British colonialism, Western art and photography.

Not only large paintings, miniature paintings, which often artists drew and presented to the royals are seen profusely in Krishna Vilas and Laxmi Vilas Chowk. These depict life in the city and City Palace and are also an excellent referral point to the time of the Mewars and Rajasthan. Today, many artists enroll themselves in classes to learn miniature painting in the lanes of Udaipur’s Bhattiyani Chohatta Market.

The displays spread over the many ‘mahals’ amply demonstrate the richness of the art and craftsmanship of local artists. At the same time, the influence of the wind blowing from overseas is in evidence too. The Chini Chitrashala, for example, has beautiful porcelain Chinese and Dutch ornamental tiles in blue. In one corner of another section, you can see a sahib in a hat, a contemporary picture of India under the British.

Kanch or mirror work embellishments in some chambers are something to behold. The Sheesh Mahal is a dazzling hall in grey and red glass and mirrors. Glasswork of this style, achieved by having pietradura (stone inlay) filled with a complex pattern of mirror work, was first introduced by Mughal emperor Shah Jahan in his Sheesh Mahal (palace of glass) at the Agra Fort. Who can forget Madhubala dancing to the tune of Pyar kiya to darna kya in the Sheesh Mahal in Mughale-Azam? Decorative glasswork was obviously a favourite among the Indian royalty and noblemen in the medieval era. Jaipur’s Amber Palace also has its own Sheesh Mahal.

Another example of beautiful glass mosaics is at the Mor Mahal with peacocks in niches surrounding the courtyard. More than 5000 coloured glasses had gone into bringing to life three peacocks to represent the three seasons of summer, monsoon and winter. It was not just luxurious items that the Mewar rulers indulged in. VaniVilas, established in 1875 by Maharana Sajjan Singh, is perhaps the first special library in Udaipur. Kaviraj Shyamaldas wrote Veer Vinod, the history of Mewar, sitting in this enclave.

The reception centre wall has a huge, ornamental Sun emblem, Surya Chaupar, made of copper and polished with gold. The Mewars prided themselves as being the Suryabanshis clan, bearing allegiance to the Sun God; and at every other corner, the sun emblem can be seen.

Udaipur is also full of beautiful havelis. The word is derived from the Persian hawli, meaning enclosed place. They were built by wealthy noblemen and businessmen between 1830 and 1930 in the Marwar and Sekhawati Region by the Marwars. One such is Bagoreki Haveli on the bank of the Pichola Lake next to the Gangaurghat. It was built by Amar Chand Badwa, the Prime Minister of Mewar, in the 18th Century. However, with change of fortune, it fell to pieces due to lack of maintenance.

After its restoration, the haveli has become the seat of the Western Zone Cultural Centre of the Government of India’s cultural wing. In the evenings, the haveli runs an entertainment programme showcasing different dance forms of Rajasthan, establishing once again how culturally vibrant this state is. Even tribes living in the arid Thar Desert have evolved their own kind of performing art.

The haveli also has a permanent exhibition of puppets. The puppet show of Udaipur, known as kathputli (kath meaning wood and putli doll), means wooden dolls. It is a string puppetry art that goes back to centuries, practised by the Bhaat Community who were village entertainers. To get an idea of the art and dolls, one can visit the Bharatiya Lok Kala Mandal, a folk art museum established in 1952.

The museum has a special section on wooden dolls with details of their place in folk art culture. The museum runs a puppet show at regular intervals for the visitors to enjoy. The museum’s other sections are a good introduction to the ethnic culture of different people and tribes living in Rajasthan.

This site uses Akismet to reduce spam. Learn how your comment data is processed. 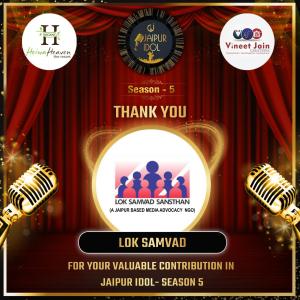 We are overwhelmed with your support during the Complete journey of Jaipur idol -5 .

Looking ahead your whole hearted support & blessings as well.

Report of Udaipur workshop of January 18,2019 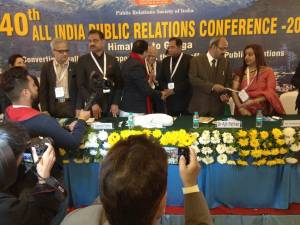 At 40th All India Public Relations conference in Dehradun on Nov 9, 2018, the book Media Makers of Rajasthan -Kalyan Singh Kothari, written by Dr. Ramesh Kumar Rawat of Manipal University, was presented, to ex-chief minister and present Member of Parliament, Book Presented to Dr. Ramesh Pokhriyal, who was chief guest at the second day of the conference.